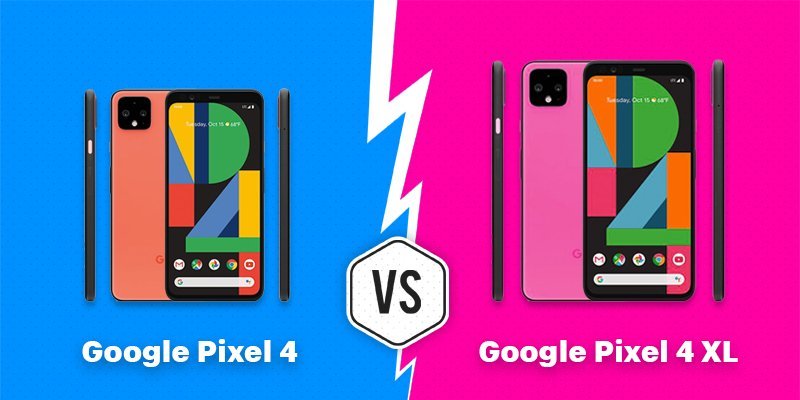 The smartphone industry has seen some really exceptional as well as failed to impress models in the last few years. And in such conditions, it’s no secret that Google pixel is probably one of the most promising series that has bought revolutionary features for their smartphones.

It’s absolutely snatching buyers from all over the world who are loving the interesting specs with great quality in a very practical price range. So, it’s quite obvious people are always talking about the series and comparing various models that buy something out of ordinary.

Today, we are going to launch a battle of Google Pixel 4 Vs Pixel 4 XL in later sections. Let’s go for it & see who wins.

Google Pixel 4 Vs Pixel 4 XL- How Are They Different?

With a lot of interesting features and qualities, both provide amazing service for different types of users. There are some specific features that highly differentiate and measure which one would be the best one for you. Depending on the design, weight, resolution, and battery life here’s a small sneak peek of both of these models in the table below.

Actually, they both are dissimilar in a few things. You see, one is an old version and the other’s an upgraded version. If you are interested to learn about its dissimilarities, here are big secrets on your curiosity:

One more difference in these products is their battery capacity that provides dissimilar features. By looking at Google Pixel 4, it has 2800mAh battery support for long-term usage. On the contrary, Google Pixel 4 XL has 3700mAh power that gives longtime battery support.

The Pixel 4 and Pixel 4 XL got different price tags based on their features and facilities. Looking at Pixel 4 price from 670$ to 800$, they are highly economical than Pixel 4 XL. In opposite, the Pixel 4 XL comes from 830$ to 900$ amount of price point as its upgraded version.

We also find the difference between Pixel 4 and 4 XL screen resolution for better HD+ pictures. In fact, Pixel 4 XL has 537 pixels per inch for a better image experience. Alternatively, Pixel 4 has 444 pixels per inch that are less clear than Pixel 4 XL.

Some Similarity to Count

Though there are some differences between both phones, it has some similar features even if one is upgraded and other is not:

Google Pixel 4 and Pixel 4 XL both have similar designs and settings. Even if Pixel 4 XL has the latest designed for improvement, still it has the same function, color, and frame as Pixel 4. Plus, both phones have exact rear lenses, back camera systems, and the same display.

Another wonderful thing on both phones is they have NVIDIA Tegra X1 processors. You see, Pixel 4 and 4 XL device runs Android 10 version that gives better operator to run. Plus, both phones have wireless charging and pixel resolution for higher performance.

Google brand provides similar camera resolution on Pixel 4 and Pixel 4 XL for perfect image quality. As for Pixel 4 XL, it holds 12.2 Mp on the main camera, 16 MP on the back camera, and 8MP on the front camera. Equally, Pixel 4 has the same 16Mp rear camera quality for picture-perfect photos.

The Pixel 4 and 4 XL has an indifferent storage capacity that gives exact spacing to download apps. Plus, both phones have 6 GB of RAM and 64 GB of ROM for installing applications. Besides, both mobile has similar options and Google play stores.

In the same way, Pixel 4 and 4 XL phones have exact same connectivity like Bluetooth, Wi-Fi, NFC and GPS options. In fact, both phone brands provide 802.11ac wireless fidelity and 5.0 version of the Bluetooth system. Plus, Pixel 4 and 4 XL have wireless chargers that we find similar.

Since the Pixel 4 XL has a bigger screen and battery support, it has water-proof features that don’t affect underwater or liquid for 30 minutes. Similarly, Pixel 4 phone is IP68 water-resistance that won’t affect on dirt, sand or mud.

We also find both the phone security system the same that gives full protection for protecting the owner’s privacy. In fact, both products have similar options like slide lock, voice lock, password, pattern, and fingerprint locking. Plus, Pixel 4 and 4 XL both have advanced face locking options.

Who Is the Winner?

There are many Google Pixel 4 Vs Pixel 4 XL debates for giving ideas on who’s the real winner. Usually, we often search for mobile that has good battery support and big features to find better comfort.

For that reason, Pixel 4 XL is our choice as it gives superb battery power for long-term usage.

You see, Pixel 4 has good value and counts as a compact phone. On the other hand, Pixel 4 XL has good battery support and big-screen features for regular usage.

By looking at both phone’s feature, we have to give the crown to Google Pixel 4 Xl for its good battery support and additional features.