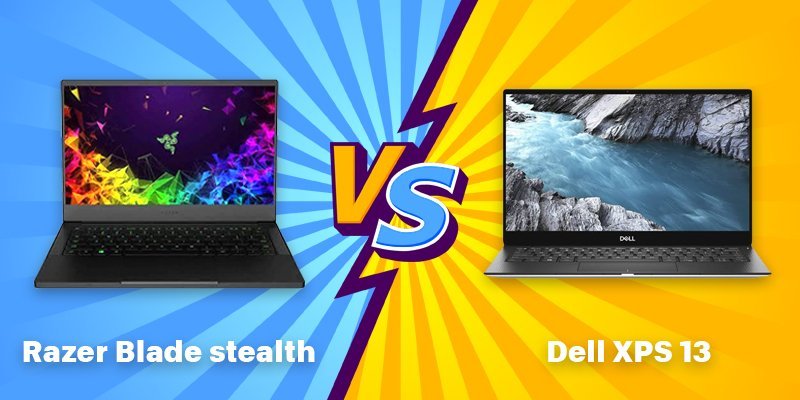 Razer Blade Stealth and the Dell XPS 13, both of these have dominated the market pretty well after getting launched. These two brands Dell and Razer, are one of the market-leading brands which have never failed to deliver a top-notch product. Compared to the Razer, Dell is a little more popular because of its affordability but both are quite competitive with each other.

However, in this very article, we are going to make a comparison of Razer Blade Stealth Vs XPS 13 laptop. You will know the differences between these two and which one is suitable for what. So not go anywhere, this is going to be an exciting comparison!

Detailed Features of Both Razer Blade Stealth and XPS 13

Both of these two laptops come with some impressive features. And below what we are going to do is compare the features of both models, so that you can decide which one is best for what!

Both of these two laptops are thin and due to that, they don’t have much space to accommodate several ports. But that being said, compared to the Razer blade stealth, the Dell XPS 12 has more ports. It comes with  3 thunderbolt ports and a couple of USB-C type ports. Not only that, XPS 13 features a microSD card slot as well that comes into play when you need to expand the storage or transfer files. Moreover, you get a headset jack also with this laptop.

The Dell XPS 13 features a very slim 13.3-inch FHD 1920 x 1080 Infinity Edge display, the bezels are way too slip that looks pretty classy. The best part is yet to come, with this model you get a 4k display, do I need to tell you the experience of working on a 4k display? Maybe no! Besides that, the sharpness, color, and brightness are decent as well. Won’t be an eye-shore for sure.

Let’s see what the Razer blade stealth brings with it. You get a 1080p display (not 4k like the dell XPS 13). That being said, if you want you can upgrade to 4k display but for that, you have to spend a little more.

In the Razer Blade Stealth laptop, they have made slight changes in the keyboard like the sight enter, shift and the backspace button size has been reduced in order to make space for the arrow keys. If you are used to using the left shift more than the right shift, at the beginning your typing will get slower. But don’t worry, with the time you will get a hang on it.

The keyboard in the razer model has a backlight and you can change the lighting. It actually looks pretty cool.

Compared to the Razer Blade Stealth, the Dell XPS 13 brings a simple keyboard. Every key size is usual and like the Blade stealth keyboard, you don’t get RGB lights here, you get white light instead. But that looks classy as well. So in terms of keyboard, there is not much difference in these two models.

Both of these two laptops Razer Blade Stealth and the Dell XPS 13 is armed with 1.8-GHz Intel Core i7-8565u processor and 16 GB ram. So for casual works both are going to deliver the same performance since the powerhouse is the same. But when it comes down to gaming and graphics, there is a big difference, described in the later section.

Now when it is coming to graphics and gaming, there is a little difference in these two laptops. The Dell XPS 12 comes with the Intel UHD 620 Graphics GPU. This GPU is good, but compared to the Blade Stealth, it falls a bit slower.

The Blade Stealth model comes with mighty Nvidia GeForce MX 150 GPU, one of the best out there. And with this, you definitely going to have a better experience than the Intel UHD 620 Graphics GPU. With the Razer Blade Stealth, you will get 164 FPS gaming experience and on the XPS 13, you get 88FPS.

Razer Blade Stealth comes with RGB backlight and 1080p display, with all that in a fully charged battery it can run for 8 hours 5 minutes. That is a huge backup, might not find in every high-end model. On the contrary, the Dell XPS 13 runs a maximum of 7 hours with a fully charged battery. 7-hour backup is not bad at all but compared to the Blade Stealth, that is low!

There is a big price difference between these two top-rated laptops. But if we look overall, then the Dell XPS 13 would be coming front. That being said, if you will playing heavy games and work on heavy graphics, then you won’t be satisfied with the Dell XPS 13. And since the Razer Blade Stealth allows you to have smoother gaming experience, and graphics experience, that will be a little expensive that is obvious.

The Razer Blade Stealth Vs  XPS 13 laptop, these two models are actually very good laptops that are worthy of investment. But on which you should invest that depends on you. The price of Blade Stealth is a little expensive but it delivers proper value for the money! So it is actually up to you. For better gaming and graphical performance, you might need the Blade stealth. And for casual use, the Dell XPS 13 should be enough.

Land grid array has come with many CPU standard sockets for PCs. Among those LGA 1151 and 1155 are well-known devices for attaching your CPU to your motherboard. However, sockets tell us the...

Whether to choose a cooler for your CPU, might be a pain. Am I right? I mean, what kind of cooling option do you prefer? You can go with air or liquid cooler. This is a headache, I think. If your box...

And the Minitipsx.com is the result of my dream. Oh please remove your all kinds of confusions rather stay relax as every single info I provide from core research of my crazy team.