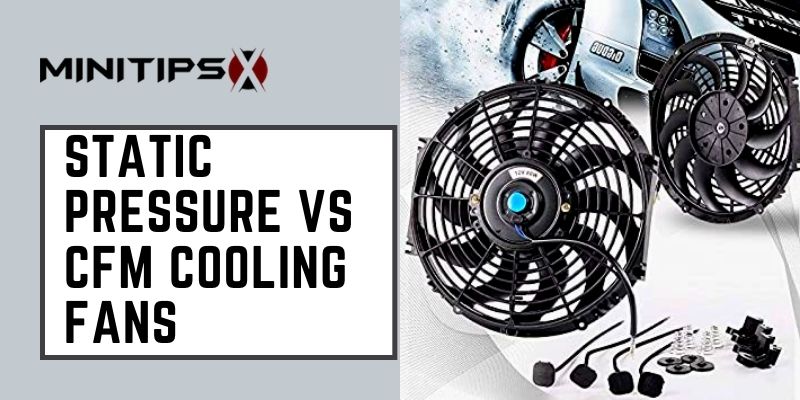 When it comes to finding a proper solution to keep your high-end gaming rig free from overheating, things get a little bit challenging. People without even knowing properly, buy a liquid cooler or an aftermarket case fan and discover they don’t actually need that.

And, it’s very important that you have your ideas about these cooling fans sorted. However, when we talk about CPU fans, there’s a lot of specs you need to process in your mind to identify what you’ll need.

These include types, RPMs, voltage and even watts. One very confusing topic is about the static pressure vs CFM fans. Today we will look at both of these fans and find the similarities and differences. Keep on Reading!

What is CFM & Static Pressure Fans?

At the maximum RPM, a certain fan is capable to remove a specific amount of air and that’s known as airflow. This is the case with no restrictions available. The CFM cooling fans are also known as airflow fans and basically based on what we just discussed.

These types of fans work with areas that are entirely open and nothing is creating a blockage at the front nor back of the fan. It can freely move air in and out. The atmospheric pressure is the only factor here. The blades of such fans come with a unique design that can easily move air to an open environment.

Moving to static pressure, let’s start with what the terms denote to. It is basically the same airflow theory we told above but the difference here is, a static pressure fan can also move air even with the presence of restriction. It can handle a certain amount of torque while pushing air inside or outside. These types of fans are great for small and restricted spaces.

We believe, to decide what type of cooling mechanism among static pressure and CFM or airflow that will serve you better, you need to know about their differences in a few factors. Let’s discuss them openly below.

Undoubtedly the major difference between static pressure and CFM fans is the blade design they come with. This difference has a direct connection with these two types of fan’s optimization matter. Also, because of the blades, the cooling mechanism works differently.

The CFM fans come with pretty skinnier fan blades. The gaps between the blades are noticeably huge. And also, there is a greater number of blades in airflow fans compared to static pressure fans since these are skinnier. The actual motive behind such design is to keep the blade rotation simple and easy for only focusing on moving air.

On the other hand, the static pressure fans usually come with wider blades. They, however, don’t come with such gaps between blades. The gap is similarly small between blades an outer chassis ring. So that the airflow is not as free as CFM fans. But this surely helps to force the go through fan blades when a restriction is present.

There is also a hybrid blade design available that comes with both airflow and static pressure optimizations. These are great to get both static pressure and good airflow with mixed-up blade structure.

Both of the fan types come with different air traveling direction. With an airflow or CFM fan, you are more likely to experience air traveling in a straight method. It goes straight through fan as far as it can. The pushed air has better focusing on the center.

In maximum cases, the airflow or CFM fans are seen in areas that are not obstructed in any way. Such as the back-case outtake and top case intake areas. While the static pressure fans are better for radiators, CPU heat sinks, hard drive cage included front or top case intake and so on.

There is a very slight difference between both types of fans in terms of pricing. Both are actually pretty close to each other and reasonable enough. However, since the static pressure fans have to handle resistance, it sometimes prices a bit more.

This is basically the case with entirely static pressure focused fans. However, there are too many good options that come with inexpensive price tags with both varieties so there’s hardly anything you need to worry about.

There’s no best option to try between the CFM and static pressure fan. Because both of these mechanisms for fans actually work great in their own ways depending on circumstances. It actually refers to the area you’ll be using the fan.

To make it short, if you are using hard disk cages or air filter just ahead of the CPU fan, then there’s probably very less amount of space between them. So, go for a static pressure optimized fan. On the other hand, when you have enough open space in your CPU case or the hard drive cage can be moved away from the fan, go for an CFM optimized fan.

So, which one between the static pressure vs CFM optimized fan seems the best choice for you?